«A very pretty little island». From Perugia to Polvese Island in the year 1854

02 Ott «A very pretty little island». From Perugia to Polvese Island in the year 1854

Posted at 16:54h in English by associazione Arbit

On our return to the hotel we sent for a man who owned carriages, and agreed with him to take us to Lake Thrasymene the following morning. Ever since my arrival in Perugia I have longed to make this expedition, but the count and countess said they wished to go too, and begged me to wait. I do not think they would have made up their minds now to go, but I would not wait any longer, and said, if they could not accompany me, I should invite some of the P. family to do so. Don Porfidio came in the evening; and we begged him to go with us. He was too occupied to be absent front Perugia, but most kindly gave us much information, and sent us a note of introduction to a friend of his, who would procure us permission to land upon one of the islands.

Saturday the 26th was a beautiful day. We had some coffee and eggs, and started at half-past six, leaving the city by the Porta St. Carlo. The drive was very pretty, the road generally level, and winding through fertile plains along the valley of the “Caina,” a narrow, bright, clear river. The vine was the great object of cultivation. A picturesque middle-age tower, covered with ivy, upon a very high hill, was very conspicuous long before we arrived at it. It is called “La Magione,” and is about ten miles from Perugia. The hill was so steep that we had oxen to drag us up. We left the carriage when we entered the little village of the same name as the tower, but there was nothing to be seen; the church was shabby, and some pictures which would have been tolerable were quite ruined by the insertion of little tinsel crowns over the head of the Virgin and Child, a practice very common in Italy.

At a short distance from the village we stopped again to explore a most interesting and picturesque castle called the Abbey of La Magione. It is a square pile of building with four towers at the corners, all of them differing from each other – one is round. In the centre is a campanile, or bell-tower. Part of the ancient wall still remains, and an old gateway by which we entered. The interior is very oriental in its appearance; there is a large court, round which run galleries with arcades, three stories high. It is occupied now by a farmer, and looked sadly neglected – barrels, farming utensils, pigs, poultry, and dogs, being seen in all parts. The man who showed us the castle was very intelligent, and gave us much interesting information about its proprietors. It was formerly the strongest and richest possession of the Knights of St. John of Jerusalem, and still belongs to the order. People usually think, that this order exists no longer, but this is not the case. The last grand master was L’Ile d’Adam, when the order was suppressed by Napoleon. He died many years since, and has never had a successor; as he was the military head, and the days of chivalry being over, another is not required. The grand prior, formerly the second in command, is now the first; he must be a cardinal and a Roman prince. Cardinal Lambruschini, who died two or three months since, held the office for many years; his successor is Cardinal Treschi. The master lives in a house belonging to the order, in the Via Condotti, in ‘Rome. I forget his name; he is not at all popular, and is said not to have the interests of the order at heart. There are a great many chevaliers, who wear a red uniform with black facing, white trousers, and the cross of their order; they elect their master, subject to the approval of the Pope.

The revenue is derived from this estate of La Magione. It is paid to the society of the Propaganda, who pay 4,000 crowns annually (rather more than £800 English) to the grand prior, and the same sum to the sub-prior, who always lives on the Aventine, at St. Maria del Priorato, and is supposed to do all the business of the order, the cardinal chief having other occupations and places of abode. The master also receives 4,000 crowns. I conclude the Propaganda make something for themselves, over and above the 12,000 crowns they pay, but this I could not learn.

I took a little sketch of this interesting castle, and then we entered the carriage, descended a steep hill, and soon came in sight of the lovely lake. It is more than thirty miles in circumference, and only four miles broad in the widest part. It really was most lovely, surrounded by mountains, and the little white villages nestling among trees along its banks. We drove by it for about two miles, when we stopped at the little village of St. Feliciano, such a miserable dirty little place, and, oh, such an inn! There was a large kitchen, and two small bedrooms, one occupied by the family, where the landlord lay sick, groaning dreadfully. We ordered some food, and while it was being prepared, went out. 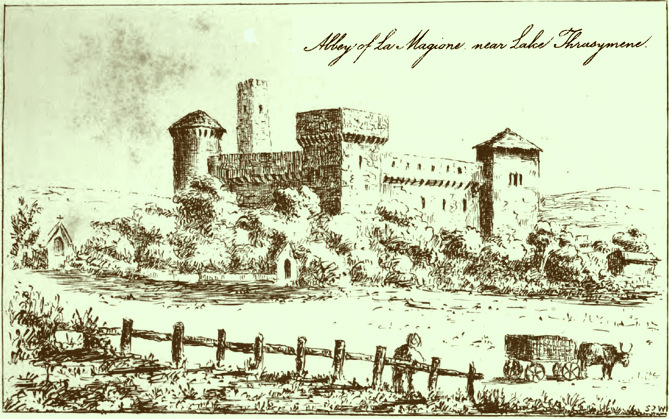 Count F. took Don Porfldio’s note to the curate, and on his return we went to see a huge “regina,” twenty-four pounds’ weight. This is an excellent fish, peculiar to this lake, and usually about four or five pounds’weight. It was being exhibited, and its owners then meant to sell it by the pound. Upon our return to the inn we found a table prepared in one of the bedrooms. The curate with his vicar had arrived, and joined us in our repast, which we enjoyed greatly. We had broiled fish – “regina” and “tincha” – which was excellent, and cooked to perfection; eggs, potatoes, and apples. The bread was very bad. The wine was said to be very good, but I did not taste it. The curate was most polite, and so was the vicar, a good humoured young man of twenty-two, in a suit of cotton velvet, and very unclerical in his appearance. He went out to order the large boat belonging to the proprietor of the island, for the little cockle-shells used for fishing are very dangerous when there are squalls, and there was a good deal of wind. When all was ready we went out, and found a huge flat-bottomed boat like a room. Four chairs were prepared for the “forestieri” and “his reverence,” and a bundle of straw for the vicar, who had selected a numerous crew to manage the unwieldy vessel. We were soon off for Isola Polvese, a distance of two miles. The poor priest did not at all enjoy being on the water: there were regular waves, and the wind was so strong that the boat rocked greatly. The priest continually crossed himself, invoked “Maria Santissima,”. and asked if we should not be drowned. As we approached the island the water was smoother, and was of the most delicate pale green.

Besides the natural beauties, the historical recollections of Lake Thrasymene add greatly to one’s pleasure. These mountains, islands, and the lake remain as they were in the days of Hannibal. I asked the vicar to show me the tower built on the site of Hannibal’s camp, the Monte Gualandro, which he crossed to enter the valley of the lake, and the Sanguinetto, the little river which ran with Roman blood. All these places were at some distance, near the furthest extremity of the lake.

Half-an-hour in the boat brought us to the “Isola Polvese.” The “guardiano” came down to the boat, and Don Giam-Maria Seraphinis, the priest, got out and spoke to him; after which permission was given us to disembark. It is a very pretty little island, three miles in circumference,.and is very fertile. On the highest point are very picturesque remains of a castle. We entered a court-yard surrounded by high walls, and a tower: these ruins date from the fifteenth century. At a little distance are the remains of a convent of Olivetani monks. The church must have been large and handsome; now it is roofless, carpeted with turf, and most of the arches dividing the centre from the side aisles are broken. The monks always choose fine situations for their convents. The view from this spot is most lovely over the lake, which is surrounded by mountains, and the other two smaller islands, Maggiore and Minore, the former of which is inhabited, and its little town surmounted by the church; shone bright and white in the sun. The Olivetani monks possessed Isola Polvese till about 300 years since, when they sold it. The present possessor is a Roman Count, who uses it principally as a game preserve. It is uninhabited except by one family of “guardiani.”

We walked over the island in all directions. Our boatmen cut the large reeds and canes which grew in profusion, and beat the bushes to show us the numbers of hares, rabbits, and pheasants. I never saw so many pheasants together anywhere. But time advanced, and. it was necessary soon after three to get into the boat. The wind had fallen, and poor Don Giam-Maria was not in fear for his life, but lest he should catch cold, to avert which catastrophe he took out a coloured pocket-handkerchief and knotted it on his head like a wig under his clerical hat, to the great amusement of the vicar. The priest ought to come over to this island occasionally to say mass for the “guardiani,” but, being afraid of the water, he sends the vicar, who comes once a month, when “wind and waves permit,” to say mass at a tiny chapel.

When safe on terra firma, we went to Don Giam-Maria’s house, which commands a beautiful view over the lake. His sister brought us some coffee, and we stayed half-an-hour in conversation with her and the niece, a child of ten years of age. The walls of the room were hung with engravings, and the worthy priest had a curious inlaid cabinet with secret drawers, of which he was very proud. In summer this must be a very pleasant residence, but very cold and exposed in winter. We went afterwards to the church, a very wretched place. Count F— whispered to me to prepare a compliment, as Don Gian-Maria expected we should praise his church, but truth forbade my doing so, as I could not find one thing to praise. At last my eye fell on a number of low benches, and I said I was glad to find he had so large an attendance of children. This remark pleased the good man, who was very fond of children, and we talked some time about schools. He showed us a wretched head of St. Jerome, like a sign-board, and said that the design was said to be by Lo Spagno!! My friends complimented him on such a possession, but I really could not.

The vicar then announced our carriage. We returned to the hotel, paid our bill, shook hands with Don Giam-Maria and the vicar, and drove off, all the village being assembled to witness our departure, for a visit of “forestieri” is a great event to these simple people.
We left St. Feliciano at half-past four.