From 1833. Fishing boats used on the lake of Orbetello

13 Feb From 1833. Fishing boats used on the lake of Orbetello

Posted at 13:33h in English by associazione Arbit

I now beg your attention for a few minutes, whilst I describe the next drawing.

In the summer of 1833 I made a journey from Leghorn to Rome along the coast, a terra incognita to most travellers, my object being to trace the Via Aurelia. At Orbetello, the last town in the Tuscan States, besides making some interesting antiquarian discoveries, I observed the boats which I am about to describe.

Orbetello stands upon a peninsula, projecting into a shallow lagoon of some extent; the boats which are used upon it, are ﬂat-bottomed, rise considerably at the bow and stern, being lowest at midships, across which part of the vessel a beam is fastened, about four inches thick each way, and which projects about two feet six inches over each side. On each of the ends of this beam an oblong piece of plank is nailed, the longest sides being horizontal, and a stout pin rises from each of these. The oars are of considerable length in proportion to the boat, and of great breadth in the blade, which is of the form shewn in the drawing. These oars rest upon the pieces of board at the ends of the cross-beam, being attached to the pin by means of a piece of cord, in this last respect resembling a mode adopted in boats on our own coasts. The blade of the oar slightly overbalances the portion within the fulcrum on which it rests, the handles nearly touch each other, meeting a-midship. By this contrivance, one man can manage a pair of very powerful oars, and can drive a boat, which is apparently but ill adapted from its form for speed, with surprising rapidity through the water; he can arrest its progress, or turn it with equal rapidity and certainty, and with very little exertion. 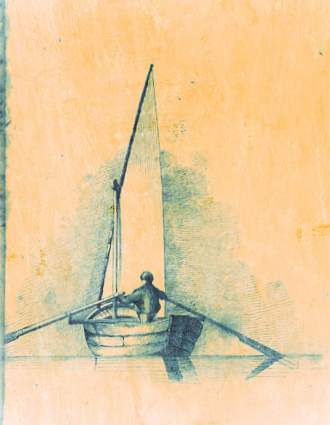 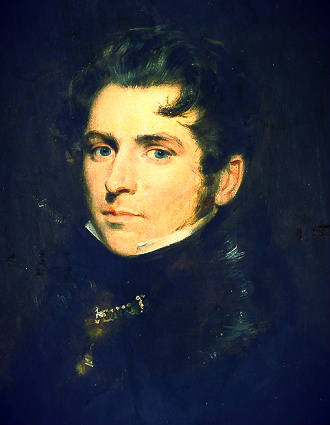 My knowledge of boats and ships is indeed very triﬂing, but l could not help seeing how easily the ﬁsher of Orbetello manouvred his rude boat; and therefore I have been induced to bring forward this notice of a vessel and mode of rowing which I am not aware has been described. Besides, it suggests ideas as to the probable mode in which the ancients managed their triremes, well worthy the attention of the antiquary, especially if he will combine the hint thus obtained with the modes of rowing followed in the Bay of Naples on board the Sorrentine boats, which, I have been led to imagine from an examination of pictures in Pompeii, are much the same in every respect as the galleys which in old times navigated the same sea.